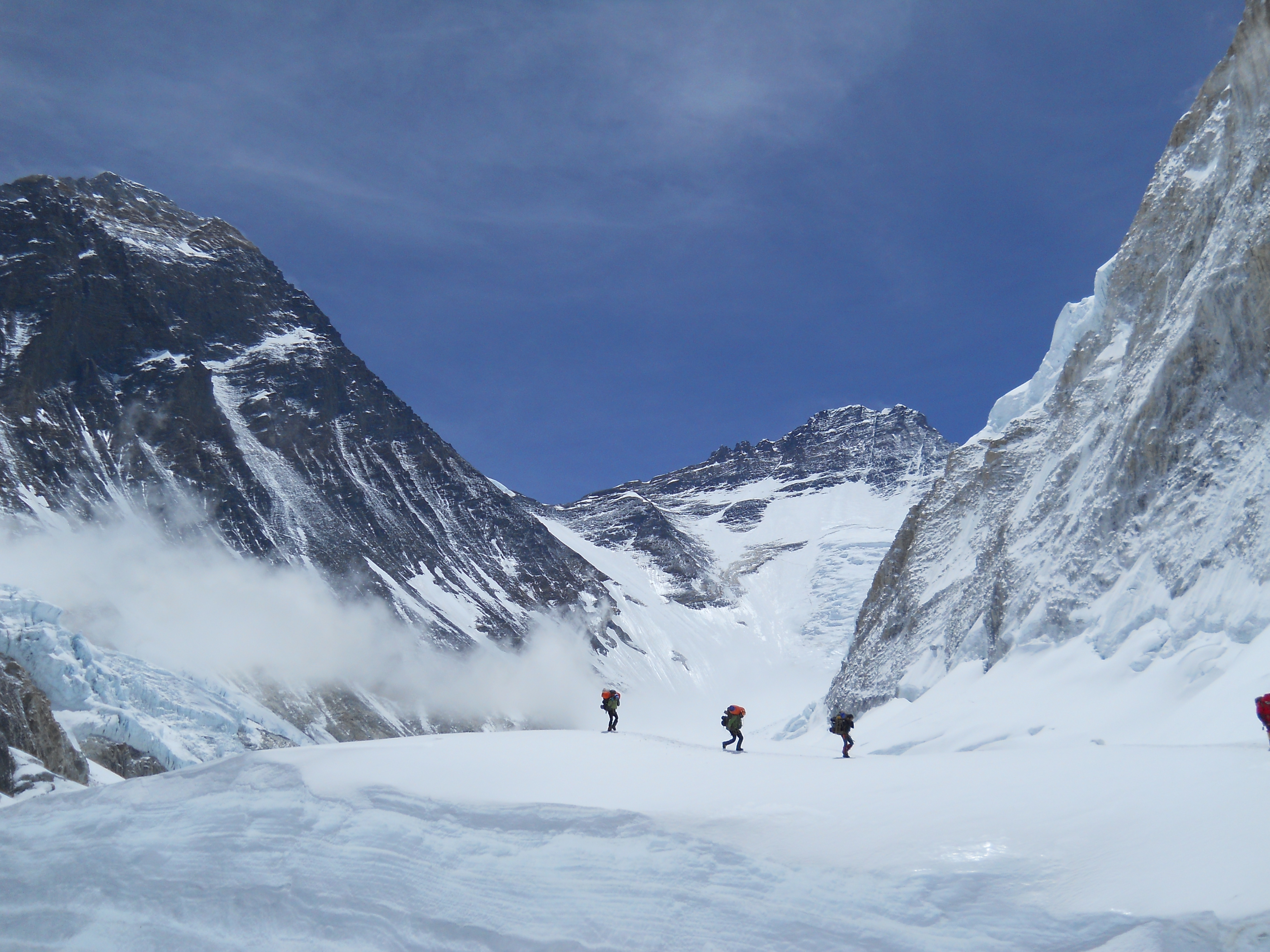 Yesterday we returned to base camp after a couple of very exciting nights on the big hill. We started early sunday morning around 5am, up again through the uncontrollable world of the Khumbu icefall. We moved faster this time due to our further acclimatisation. It’s a weird place the icefall, it almost feels like a living creature that holds your fate in its hands. Its beauty is quite enchanting….but the less time spent in its presence the better.

We arrived at camp one around 9 30 am. Camp one is located on the flat plains at the head of the icefall. As we arrived the winds were picking up so we bunkered down in our tents and started the endless process of melting snow to drink and cook with. I was sharing a tent with Roger, a very cool dude, ex marine and all round nice chap. Arriving at camp one at 9 30am meant we had to spend 22hours in our tent. During the day the suns heat makes life at camp one a very hot place. The wind throughout the day picked up incredibly, creating lots of spindrift throughout the camp. Therefore we had a system of ventilating our tent from the heat. As soon as the wind dropped for a moment we would open all the doors of the tent to cool us down. However very quickly the spindrift would pick up again, showering us with snow. so we would lock up the tent again and be at the mercy of the sun’s heat. This process went on and on until the sun finally set around 6pm, then it got cold, very cold.

The next morning we woke early to again start the process of melting snow for breakfast and to drink throughout the day. At 7 30 we left camp one to begin the long trudge to camp two. It was bitterly cold as the sun had not yet risen, giving the need for balaclavas and big down coats. The route from camp one to camp two heads straight through the middle of the Western Cwm. This is what I had been looking forward to. The Western Cwm is a massive valley, often called the valley of silence. To the left of me was Mount Everest looming above, directly in front of me was the massive peak of Lhotse and to the right was the beautiful Nuptse. It’s a truly amazing place and a total honour to travel through. Especially after the unstable environment of the Khumbu icefall, the Western Cwm seems such a peaceful experience.

When we arrived at camp two , we witnessed the destruction of the winds from the night before; our camp had been flattened. Tents had been ripped apart, poles snapped and our mess tent was a mass of bent metal on the floor. After a quick breather we began to help the sherpas re build camp 2. We quickly erected some new sleeping tents and strongly tethered them to the ground. The sherpas then started on the mess tent, they worked like a well oiled machine. In very little time the mess tent was once again standing, held together with rope and duct tape. After camp two was rebuilt we spent the rest of the day eating, chatting and reading. Letting our bodies adapt to the camps altitude of 6,300m (getting pretty high!) Luckily we all seemed to be acclimatising well. You would get out of breath if you walked somewhere too fast, but no headaches, loss of appetite etc!

The next morning Roger and I left camp one at 6 30am to head back down to BC. Walking through the Western Cwm as the sun was just rising over Lhotse was beautiful, totally amazing, I think I was smiling to myself under my buff most of the way……experiencing the Westerm Cwm was what I was looking forward to the most on this mountain, it completely lived up to expectations. We were back at BC around 10am and just in time for a late breakfast! We now have a few rest days here until we head back up the hill to touch camp three and acclimatise further before the big summit push!