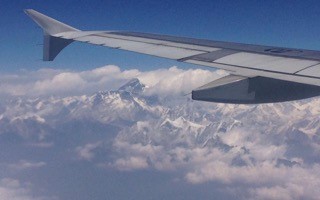 Travelling to Mount Everest basecamp on the North side of the mountain is a very different experience to the South side of the mountain. When I climbed Everest via the South side in 2012, I trekked for 9 days through the spectacular Khumbu valley slowly gaining altitude each day to reach the basecamp. In contrast, on the North side of Everest, there is a road all the way from Lhasa airport to pretty much outside my tent at Everest basecamp!

Early on the 12th April we left the hustle and bustle of Kathmandu and boarded a flight to Lhasa, Tibet. The flight took us straight over the Himalayan mountain range where the highest mountains in the world were sprawled out just a few meters below us. Unfortunately, I couldn’t make the most of this spectacular flight, as I am terrified of flying! As I sat there with sweaty palms and an impending sense of doom, my guide Jon had his face pressed to the window, excitedly pointing out these Himalayan giants.

Landing in Lhasa, seemed to me to be the polar opposite of Kathmandu. Don’t get me wrong, I love visiting Kathmandu, it always feels a bit like coming home. But after a few days of smog, dust, noise and all round chaos, it can get a bit much! In Lhasa the roads are flat, straight and tarmacked, the people stop at traffic lights and the speed limit on the highway is only 30mph! Lhasa lies at 3,600m above sea level and is a strange mix of modern China and ancient Tibet. The magnificent Potala Palace looms over the city, building first started here in 1645 and has been home to every Dalai Lama since, up until the exile of the 14th Dalai Lhama in 1959. Beneath this focal point sprawls out the capital of Tibet, Lhasa. Once an ancient religious nation closed to foreigners, Lhasa’s streets are now arranged into perfect blocks with Chinese fashion stores, restaurants and banks on every corner. There is even a KFC!

From Lhasa we jumped onto the friendship Highway (yes, that’s the name of the actual Highway), a perfectly constructed road all the way to our next stop, Shigatse 3,860m above sea level. Again, the focal point of this city is a huge monastery overlooking the inhabitants. The following morning we once again joined the highway and slowly gained altitude to our final town before basecamp, Tingri 4,200m. We had decided to spend two nights here to acclimatise to the altitude, basecamp would be a whopping 1,000m higher.

During our stay in Tingri we had the first view of our objective, Mount Everest. Walking out of the town, we headed up a near by mountain whose summit was just a scratch over 5,000m. From our lofty viewpoint we could see some of the highest mountains in the world! Lhotse, (4th highest) Makalu, (5th highest), Mount Cho Oyu (6th highest) and Mount Everest, the highest mountain in the world and our objective. The views were incredible, being able to see so many beautiful peaks, knowing we were getting closer was pretty exciting!

After four solid days of driving, the day had finally arrived to reach Mount Everest basecamp. The final 96km of our journey were on one of the most impressive roads in the world! Built by the Chinese, this perfect road snakes up the mountainside, hairpin bend after hairpin bend, it gained us over 1000m in altitude. How amazing would this road be on a bike!?

Mount Everest emerged out of the horizon, so enormous, so beautiful and so awe-inspiring. We had finally made it to basecamp, our home for the next six weeks.

You are invited to follow my expedition over the coming weeks from the comfort of your own home!

I am using 3D tracking so you can watch my progress LIVE on Mount Everest – www.molliehughes.co.uk/everest-2017/everest-3d-tracking.